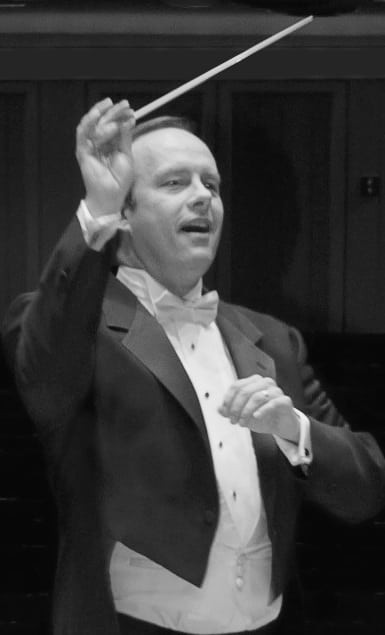 Stephen Alltop has built a career based on excellence in several disciplines, conducting both orchestral and choral ensembles, and performing as a keyboard artist.

The 2022-2023 season marks his twenty-sixth year as Music Director of the Apollo Chorus of Chicago.

Mr. Alltop is the ninth music director in the 151-year history of the chorus. Under his direction, the Apollo Chorus has expanded its collaborations to include appearances with the Chicago Symphony Orchestra, London Symphony Orchestra, Ravinia Festival, Peninsula Music Festival, and The Oprah Winfrey Show.

A specialist in oratorio performance, he has conducted over 100 oratorio and operatic masterworks. He also serves as music director for the Green Lake Choral Institute in Wisconsin and the Elmhurst Symphony Orchestra. In 2012, he was named Conductor of the Year by the Illinois Council of Orchestras for his work with the Elmhurst Symphony Orchestra.  The orchestra has received multiple awards for excellence in programming.

In April of 2013, Stephen Alltop was named as Music Director and Conductor of the Champaign Urbana Symphony Orchestra. Highlights of his first season there include Daphnis et Chloé Suites 1 and 2 by Ravel, Bach's Magnificat, and the Symphony No. 4 by Carl Nielsen.  Dr. Alltop has served as a member of Northwestern University's conducting and keyboard faculties since 1994 where he conducts the Alice Millar Chapel Choir and the Baroque Music Ensemble.  In 2014, he conducted the world premiere of "Chapel Songs: Five Diverse Songs for Chorus and Orchestra" by Joseph Schwantner, commissioned for the 50th Anniversary of Alice Millar Chapael.

In 2011, he was principal organist performing Bach's St. Matthew Passion with the Ensemble Orchestral de Paris and conductor John Nelson at the Basilique St. Denis in France.

As conductor of the Annual Celebration of Celtic Music at Chicago's Symphony Center, he has worked with distinguished television and stage performers such as Brian Dennehy, Bill Kurtis, John Mahoney, and Martin Sheen. His performances have been broadcast on Medici TV, RAI Italian Radio and Television, and the WFMT Fine Arts Network. His recordings can be found on the Albany, Cedille, Clarion, and American Gramaphone labels.

Cody Michael Bradley is a versatile Chicago-based musician with experience as a singer, pianist, vocal coach, music director, and conductor.

Currently on the voice faculty of Loyola University, he has previously worked at the College Light Opera Company (MA) and spent one season at Opera in the Ozarks (AR) as both singer and pianist.

In 2016 he returned for his second season as a piano fellow at the Bay View Music Festival (MI), where he also conducted part of an opera scenes program.

Recent regional credits include productions with Chicago Fringe Opera, Petite Opera Productions, and Thompson Street Opera. Cody works with numerous schools, churches, and community service groups as a pianist and serves as a vocalist and assistant conductor with the Apollo Chorus of Chicago.

Donate to Our Continued Performances ›